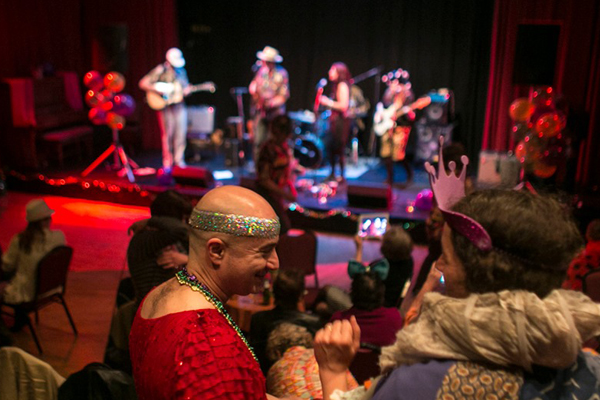 As the winter chill sets in, grab your tickets and bundle up for a night of entertainment at one of Arcata’s iconic theater houses.

Arcata Theatre Lounge
Affectionately known as “ATL” to locals, the Arcata Theatre Lounge has been a historic fixture on G Street for the past 80 years. Boasting an art deco movie theater marquee, ATL is best known for off-the-wall events like the annual Mr. Humboldt Pageant, a weekly Sci-Fi movie night and live screenings of major sporting events and political debates. The venue is also home to Arcata’s edgy music scene, featuring talented voices in musical genres from bluegrass to punk rock from across the country. ATL’s reputation for their iconic events and must-see music shows make it a worthy stop on any trip to Arcata.

Arcata Playhouse
A hundred years ago, Arcata’s Creamery District was the heart of California’s dairy industry, producing 1,500 pounds of Golden State Swiss Cheese a day. Today, the industrial neighborhood just west of the Plaza has become an avant-garde arts district for dance, theater and music at the Arcata Playhouse. Established in 2007, the 150-seat venue hosts a wide variety of performers and workshops throughout the year with a focus on supporting multi-cultural music and the arts for youth. In addition to beloved annual events like the Rebel Craft Rumble (a crafty showdown) and Fervor Fest, the playhouse is a great place to catch unique performances.

Minor Theater
Arcata’s historic Minor Theater underwent major renovations in 2016 to bring America’s
oldest theater built for feature films back to its glory. Today, the Minor is locally owned
and operated, and screens a well-curated selection of indie, foreign and blockbuster
films. Upgrades to The Minor, originally built in 1914, include reclining leather seats,
table service, and a menu featuring locally-made treats (gluten-free empanada
anyone?), beer, wine and kombucha. After buying a pair of reasonably priced tickets,
moviegoers can lean back to enjoy the show while an usher oh-so-quietly delivers fresh-
popped popcorn, pizza and a glass of Pinot Noir to enjoy with the show.